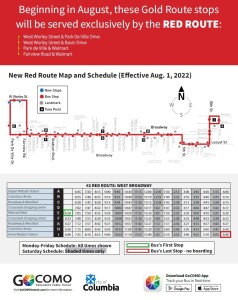 Effective Monday, Aug. 1, Go COMO transit will provide service to 10 new bus stops on the gold route, giving riders increased access to Columbia. The gold route, which currently starts at the Wabash Bus Station and travels west along the Worley Street corridor, will now also head north toward Parkade Plaza. In doing so, it will stop at two new stops along North Garth Avenue, four new stops on the Business Loop and four new stops on West Sexton Road.

The specific locations of these 10 new stops will be at:

After visiting these 10 new stops, the bus will return to its existing route on West Worley Street and travel west toward Columbia Mall. After reaching the mall, it will head directly back to the Wabash Bus Station, not revisiting the Business Loop during its eastbound return trip.

In order to maintain a route time of 45 minutes, the gold route will unfortunately no longer be able to serve the Walmart Supercenter area on West Broadway. Riders who wish to visit this location must use the red route, which will continue to provide service to the West Broadway Walmart area after Aug. 1.

Riders will also be able to review details of the new routes on City social media, via the Go COMO app and on the Go COMO website, GoCOMOTransit.com.