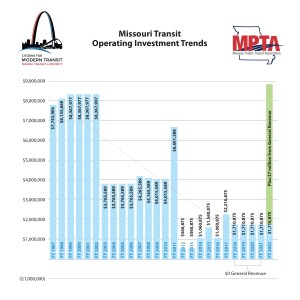 This increase is critically needed – considering Missouri is ranked 45th in the nation for transit investment and had allocated only $1.710 million each of the last four consecutive years – but it will go so much further when considering federal matches.

This funding will help provide the non-federal or local match required to enable transit providers to draw down some of the $91 billion in federal funds earmarked for transit as part of the $1.2 trillion Infrastructure Investment and Jobs Act.  Federal funding support requires a 50:50 match for transit operations and an 80:20 match for capital programming. Missouri transit providers have been working diligently to identify local funding sources through sales tax, private contracts and more, but the most significant missing link up to this point had been the lack of state funding. In addition, Senator Williams worked to increase the MEHTAP funding as well by $2 million to $5 million.

Conceal and Carry on Transit

Various bills were introduced in the MO House of Representatives and the MO Senate this session which would allow individuals with conceal/carry permits to carry their firearms on public transit buses, vans, trains, and other spaces owned or operated by a public transit provider. In light of the understanding that allowing firearms on public transit may serve as a detriment to ridership and has not been proven to enhance safety and security of the system, MPTA, Citizens for Modern Transit, as well as many MPTA members opposed any legislation which would allow carrying concealed weapons (CCW) on transit. Several Missouri transit providers including Bi-State, KCATA, and City Utilities of Springfield testified along with CMT, MPTA, Greater St. Louis Inc., City of Kansas City at hearings throughout the session.

Early in the last week, there were several attempts to include a CCW on transit amendment.  Thanks to all the Senators who were engaged to insure CCW on transit language did not pass this session.