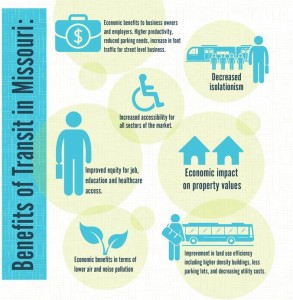 The Missouri Public Transit Association today released the findings of a six-month study designed to quantify the economic impact of public transit services in the state of Missouri. Highlights include the fact that the direct and indirect impact of public transit in Missouri this year exceeds $3.67 billion, yet a distinct lack of state funding for transit in Missouri remains.

The first-of-its-kind study, commissioned in partnership with Missouri Public Transit Association, Citizens for Modern Transit and AARP in St. Louis, was led by Robert M. Lewis, FAICP, CEcD, an independent consultant and assistant professor of Urban Planning & Development at Saint Louis University. He revealed the following findings from the 2019 Economic Impact of Public Transit Services in the State of Missouri study.

The study also confirmed that Missouri transit providers serve every county in the state. The highest density of transit utilization is found in the urban areas of St. Louis and Kansas City, but there is access to public transportation in all rural areas and small towns. It also highlighted a distinct lack of support from the state when it comes to transit funding – pointing to JeffTran as a local example. JeffTran operates fixed route bus service in Jefferson City. It has a $6,597,000 economic impact on Cole County and supports 94 jobs. Yet, it received less than .6 percent or $15,623 from the state of Missouri for its FY2017 budget of $2.5 million. The remainder came from federal funding and local sources.

“This pinch is not limited to Jefferson City – it is being felt across the state as Missouri currently allocates $1.75 million per year for public transit, a total that must be divided among all 34 transit providers,” commented Lewis during his presentation. “This amounts to 34 cents per Missouri resident, which is similar to Kentucky, but less than a third of Arkansas and one quarter of Oklahoma, and is almost insignificant when compared to Illinois. Of nine bordering states, Missouri has the 8th largest GDP and the slowest growing GDP since the Great Recession.

“The hole that exists in each transit providers’ budget is funding from the state of Missouri – it is missing from the equation,” added Kimberly Cella, executive director of the Missouri Public Transit Association. “That is why we did this study. State funding is at a record low. Missouri ranks 47th in the country for state funding for transit. Some of our transit providers are getting as little as $5,000 from the state. We’ve got to be bold. The state has to do better. Whether you ride transit or not, Missouri’s investment in transit is key to the economic viability of this state.” 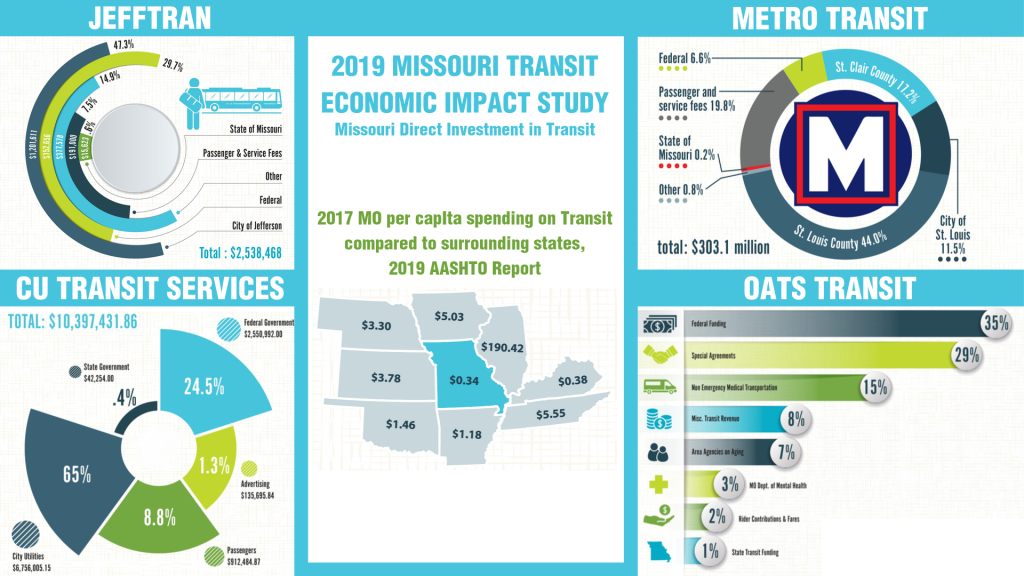 “Transit is delivering on its promise to Missouri despite the distinct lack of funding.  But the impact could be bigger. Any increase in investment by the State of Missouri could exponentially change the game in terms of economic return,” added Cella.