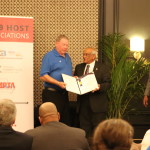 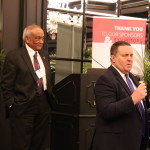 Robbie Makinen, president and chief executive officer of KCATA and MPTA secretary, was honored with the Award of Distinction for his leadership in partnering with the KC Streetcar Authority, the City of Independence, the Unified Government of Wyandotte County and the Johnson County Government to provide seamless and efficient transit access to more than 16 million riders annually through “RideKC.” He was also recognized for his leadership role in the integration of app-based technology for new Bus Rapid Transit projects, as well as developing new transit-oriented development projects and initiating free fare programs for veterans.