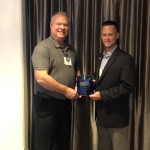 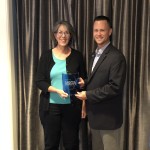 As part of its 2019 State Conference and Expo in Kansas City, Mo., the Missouri Public Transit Association (MPTA) recently celebrated the noteworthy efforts of those committed to improving public transportation in the state of Missouri. During the event, the MPTA presented the 2019 Transit Champion Award to the City of Jefferson Transit (JeffTran) for its unwavering efforts to deliver transit services to residents despite recent challenges. The organization also presented the 2019 Friend of Transit Award to Mary Gaston of St. Joseph for her longstanding service to the transit industry.

JeffTran received the 2019 MPTA Transit Champion Award in recognition of changes the transit agency made to its fixed routes in 2018 to help increase ridership, shorten trips and make service more convenient. The MPTA award also honored JeffTran for its efforts with emergency management during flooding earlier this year and after the tornado devasted the city in May. During that time, JeffTran assisted first responders by suspending regular service to transport storm victims to shelters and other resource centers in the area.

Mary Gaston, the former general manager of St. Joseph Transit, was recognized with the 2019 MPTA Friend of Transit Award for her dedication to the transit industry, which spanned more than three decades before she retired in July 2019. Gaston’s career also includes time spent working at the Muncie Indiana Transit System and the Greater Lafayette Public Transportation Corporation.

“Public transit is a lifeline for many residents in communities statewide,” said Kimberly Cella, executive director of the MPTA. “It is through the efforts of JeffTran, and people like Mary, that transit is able to continue to evolve so Missourians can enjoy safe, reliable and affordable access to public transportation options.”